Call for Brigade to Andalusia Oct/Nov 2021

Looking for 3 Brigadistas for October/November 2021!

Now we can finally go on another international brigade to Almería in Andalusia! We, the Interbrigadas Association, can hardly wait and still have room for 3 participants to support the work of our comrades of the grassroots trade union SOC-SAT in Almería for three to four weeks at the end of October. They campaign for the rights of day laborers in agriculture, for the socialization of large landholdings and for solidarity-based forms of economic activity. The brigades take place every year in spring and autumn.

We are looking for politically conscious people who are interested in participating in our upcoming autumn brigade for several weeks. The brigade usually consists of 8 to 10 people. 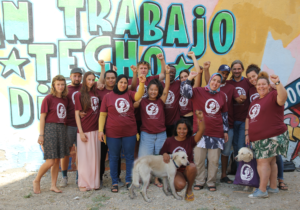 You should have knowledge of Spanish and be able to work well in a team. Knowledge of Arabic, Russian and French is also a great advantage. Flights are paid for by the participants themselves, and everyone pays for their own meals. If you cannot afford the costs for travel and/or accommodation, we will find a solution based on solidarity.

We will stay at the SOC-SAT trade union office in Almería for the entire period; Interbrigadas will cover the costs of local transport. In addition to providing sustainable support for the trade union work of SOC-SAT, our aim is to find new activists who want to work with us on a permanent basis. In the preparation of the brigade, we require participation in regular preparatory meetings. People who are not from Berlin can also participate in our brigades.

The plastic sea of Almería: Against exploitation in the greenhouse!

In the province of Almería, in the far south-east of Spain, vegetables are produced in intensive agriculture in the largest greenhouse settlement in Europe. The working and living conditions of the mostly immigrant workers in the so-called plastic sea of Almería are shocking. An estimated 70,000 of them toil in the greenhouses and packing halls, producing (organic) fruit and vegetables that are exported to Western and Central Europe – including to our discounters and organic food shops. The local workers are exposed to systematic labour rights violations, discrimination and the arbitrariness of the plantation owners. Hidden behind the certificates of the organic sector and conventional trade (Naturland, Demeter, Global G.A.P. with social standards, etc.), workers are cheated out of their minimum wage, forced to apply plant protection without protective clothing, and unionized workers are kicked out onto the streets. This is opposed by the activist grassroots union SOC-SAT, which brings workers together and supports them in the struggle for their rights.

What do we do on site?

In order to systematically improve the working situation in the Almeria region, it is important to establish a political organization and a public voice for the workers. During our stay of several weeks we support the union in their daily tasks: We distribute information material in front of the greenhouse facilities where labour rights violations are known, in order to support the workers to take action against these abuses.

We help organize rallies, demonstrations and strikes and try to build social ties with the workers. Our goal is to actively support the labor struggles and to connect the workers to the union in the long term. Most of the workers who work in the Plastic Sea come from Morocco, the sub-Saharan region, Eastern Europe and Latin America. For many, political engagement is new territory. Many migrants hardly speak Spanish, do not know their rights and are afraid of repression from the employers. On the one hand, the labor struggles mean difficult conflicts with an uncertain outcome, which require a lot of commitment and tact. On the other hand, they are opportunities for mutual empowerment and actively lived international solidarity!

This year we are focusing on organic businesses that we have been following for a long time. After years of abuses, the situation has recently escalated. As a result of increasing pressure from workers against wage dumping and unlawful fixed-term contracts, several union activists were dismissed. At “BioSabor” and “Haciendas Bio” the bosses even dismissed the entire workforce! This confrontation course of the organic companies, which are so clean on the outside, does not remain without consequences, neither in court nor on the streets. In another organic company, “Campojoyma”, the SAT managed to win elections to the workers’ council and several mandates. We are in contact with the supermarkets and labels, who, as usual, turn a blind eye to the conditions in the greenhouse – but also with comrades in other European countries with whom we cooperate.

Among other things, we will be filming on site in autumn to document the labour struggles and to use them as testimonials for our campaign work along the supply chain. In addition, a more extensive reportage project is planned. We also undertake joint excursions, for example to alternatively run fincas and social projects in Andalusia.

In the supermarket, you often see Almería on the labels of peppers, courgettes and tomatoes. So the exploitation in the greenhouse is directly linked to our shopping trolley. That is why we have made it our task to transnationalize the labor struggles and exert pressure along the supply chain. Because while many entrepreneurs are not even impressed by demos, strikes and court cases, they are still dependent on their major buyers: These are mainly European supermarket chains, which have great market power but also attach great importance to a “sustainable” and “socially responsible” image.

Our specific campaign work, but also the articulation of political demands for a structural change in industrialized, competition-driven agriculture and the search for alternative forms of solidarity-based economy are on our agenda and permanently accompany our strategic discussions.

Deadline for registration for the upcoming brigade is 10 August.

The next preparatory Meeting will take place online on 25.07. from 12-13 hrs. If you would like to participate, please contact us.